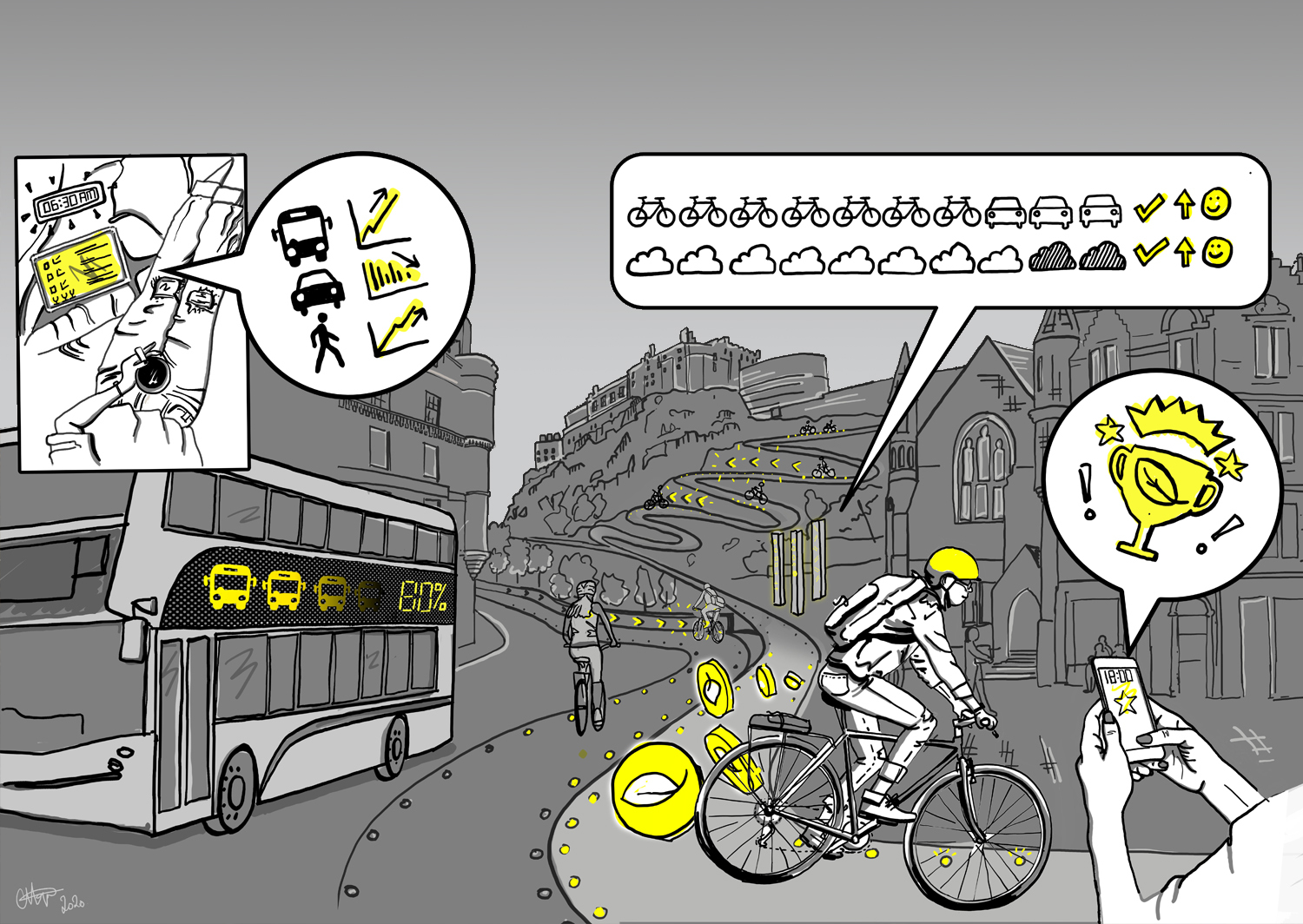 What if we harnessed Edinburgh’s tech expertise to create Scotland’s first truly smart city, using the power of big data to help us all make more informed choices about the way we move around the city? Could we use this tool to incentivise and reward better choices, to re-programme a city that has been accustomed to reaching for the car keys to start reaching for the bike or trainers instead?

Of the stories we will tell our grandchildren about the Pandemic of 2020, one of the most commonly recurring themes is likely to be how lockdown helped to coax many of us into a more active lifestyle. And, for perhaps the first time in our lives, many of us have tuned in to guidance at local and national levels each day to understand where, when and by what means we should move around for the benefit of everyone’s health.

Whilst the city’s cars sat on streets, the past ten weeks have offered us a tantalising preview of what a nearly car-free city could look, feel and even smell and sound like, reminding us that the benefits of reducing car use in our cities extend beyond ‘just’ reducing CO2 emissions and air pollution.

There is a growing consensus that we must act quickly and decisively to capitalise on the good habits we have adopted and our current willingness to adapt, before we slowly and unthinkingly drift back to the way things were before. Going back is simply not an option.

Cities around the globe are responding to this opportunity with ambitious and rapidly commissioned new infrastructure, illustrating what can happen when traditional approaches and constraints are thrown out the window and priorities are reordered. Changes people thought impossible have taken place in a matter of weeks or, in some cases, even days.

So, how do we go about making Edinburgh a place where we don’t drift back to our reliance on the car?

Whilst investment in infrastructure is an important part of the equation, the key factor is surely behavioral change; namely, how do you incentivise a population who have been used to picking up the car keys to jump on the bike or put on their trainers instead?

Even more pertinently, how do you convince them to keep doing it when the rain is pouring down, or when the hill ahead looks even more daunting than usual?

What if the answer to that conundrum lay in Edinburgh’s flourishing position as a tech leader? What if the answer was held as much in the devices we all carry in our pockets as it is in new tarmac, signs and railings?

What if Edinburgh—the tech capital of Scotland—became the nation’s first truly smart city?

It is not uncommon for people to assume that great change like this would need to look radically different. Smart cities are often portrayed and described like something from a science fiction movie, built out of hard light and run by integrated robots, optical computing and artificial intelligence. However, a smart city can be one which simply harnesses and leverages its data, working with its people to drive real improvements with measurable impacts.

Imagine a smart Edinburgh where every time you made a healthy choice—like cycling to work instead of driving—you earned Carbon Tokens through an app which, as they built up in your account, you could exchange for rewards such as free journeys on public transport, electric bike hire, or even a discount on your Council Tax.

Imagine a city which—like a giant Augmented Reality game of Mario Kart or the hugely successful Pokémon Go—laid out virtual rewards to claim on the city’s streets and paths. Doubling up the rewards on rainy days could be the factor that persuades Edinburgh’s citizens to put on their waterproofs and get out on the bike when before they would have reached for the car keys.

Imagine a city which, like the activity tracker Strava, allowed citizens to record their journeys and track their progress and personal bests, and then share this data for the common good.

And imagine a city that, like Citymapper, allowed you to get real-time information on the ways to get from A to B, but with a sustainability overlay which would indicate the carbon output of each mode.

As the system develops, it could start to reward good etiquette too. Holding a steady average speed could be rewarded by turning traffic lights green for cyclists; keeping within speed limits could illuminate feedback signs or chevrons at the roadside. A dynamic routing function could encourage the use of quieter routes during rush hour, or even create rewards for tourists or shoppers for visiting the city centre or the city’s local high streets.

‘Carrot and stick’ incentives aside, there’s a whole other dimension to this. One of the single biggest challenges we face with climate emergency is finding a way to make the often overwhelming numbers involved relatable and visible, in turn helping us as individuals to gauge the scale of the role we each have to play.

What if we started responding to the threat of climate emergency in a similar way to how we have reacted to COVID-19? What if each of us could check our phones to receive clear guidance on the most sustainable ways to get around the city, based upon actual data across Edinburgh, helping to guide and inform the best choices not just at a personal level, but as a collective, to drive real, meaningful change?

The live data collected through the app would allow real-time statistics about the collective choices of Edinburgh’s citizens to be broadcast and made visible, to help inform our decision making. Imagine the motivational impact of animated billboards in prominent locations around the city, or digital signs on buses declaring: “only 300 sustainable journey swaps from our target” or ‘average C02 saved per citizen: 3kg’.

Furthermore, harnessing this data would allow future decisions about creating sustainable infrastructure to be informed by rich real-word information on demand, needs and feedback from users.

The technology needed to achieve all of this exists already; indeed, we are gathering data consciously and unconsciously every day. The true value of data comes in connecting it, making it work for each of us in a way we can understand and leverage.

What is needed is a city with the talent and vision to bring these systems together to create a radical vision for the future. Why not Edinburgh?

This article is the first in a series of 7N journal posts exploring the question ‘what should the future hold for Edinburgh?’. The proposals herein will be discussed at a virtual round-table discussion in the coming weeks, assembling experts in relevant fields to explore the potential of the idea and to explore how it could be implemented. The outcome of that discussion will be published in follow-up.